I came across this ad that read, work at home $37-$47/hr. I decided to investigate by clicking on the link. I was taken to a website where I was told a story about a mom (Theresa Andrews) who makes $7487 working from home. 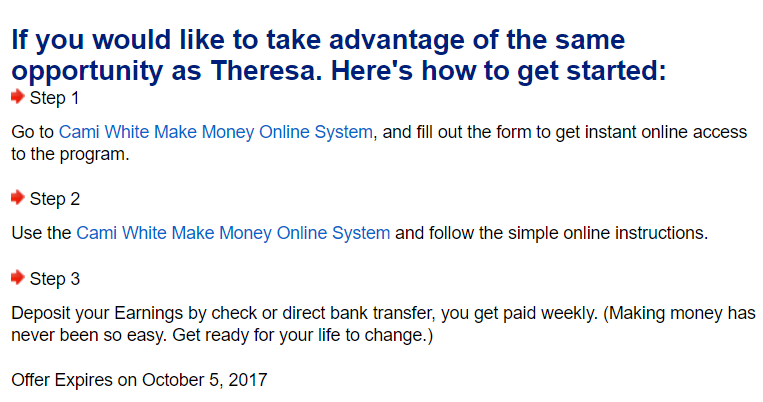 According to this work from home report site, this mom makes this money by following instructions from the Cami White make money online system course. They even showed a check saying this is prove that this woman makes so much a month.

Attached to the story was a stock photo of a woman and a child who supposedly was the mom who makes $7487 a month working from home. The photo looked very familiar and after investigating further, I realized that I had seen that photo on another site too but the name attached to it was different that time.

Anyway, I read further down the report and learned that Theresa Andrews had supposedly lost her job during the recession and was looking for a way to work from home and spend time with her kids when she found Cami White’s make money online system.

The report claims that she was able to make $8000 within 5 weeks of getting the course, without having to sell a thing to anyone.

Apparently, this course supposedly lead Theresa Andrews to about 100 multi million dollar companies that needed her skills. We are not told what kind of job she did for these companies or what her skills are.

The only hint was about working for companies like Amazon and google and taking advantage of the traffic that go through them to make money.

At the end of this report was a link that took me to a website named online success plan. On this site, I noticed how much effort they put into displaying the logo of Fox news, ABC, NBC today and CNN.

I thought this was weird especially as I couldn’t find any information about this program on CNN and the other three sites listed above.

I watched a video presented by a man who claimed to be the owner of several millionaire websites that help people live debt free. All this didn’t make sense and sounded too good to be true especially as no real information about work was given.

Both the report and the video that followed talked about making big money but did very little to explain what the job entailed. All I learned was that 50 people were need to start an online money making program completely on autopilot.

These people are supposed to register immediately and take ownership of a millionaire website build for them by the authors of the video and begin making money right away.

First of all is the display of logo of popular news sites. This is a way to make people let their guard down, especially as they starting thinking that if a site like CNN endorses this program then it must be legit. The thing is, sites like this use these logo without permission.

Another feature is a video that talks about making thousands or even millions without telling exactly what it entails. They say join and we will tell you the rest. After you join and pay the fee, you realize that you have no way of contacting them.

Finally is the pressure they put on you to join. Saying spots are limited since we only accept 50 applications. Then you come back a month or so later and the story is exactly the same.